Fair sun to the Octopus yacht

The Mediterranean solar boat fleet shines with Octopus, the 8th SunSeaRider in the series

No, this Octopus is not the 126-metre mega yacht, with two helicopters and 849,446 litres of fuel, that billionaire Paul Allen anchored in Saint-Jean-Cap-Ferrat. Nor is she a James Bond movie. Even if, only a short distance away, the Villa Maryland links all these incredible stories.

The Octopus is a Sun Sea Rider, in other words, this is a solar boat adapted for the sea. Prototype n°0 was designed in the South of France and tested for the boat rental market in Saint-Tropez for a test in 2015. 6 specimens followed in Istres for hire. In 2016, seaZen is launched with a specially ordered design to offer an open sunbathing bow and with one objective: to develop solar navigation at sea in Beaulieu from 2016.

On February 19, 2017, the Octopus is launched in Beaulieu sur mer. For more than a week the 2 sister-ships sailed next to the Môle des Pêcheurs, in the most picturesque part of the port of Beaulieu sur Mer. 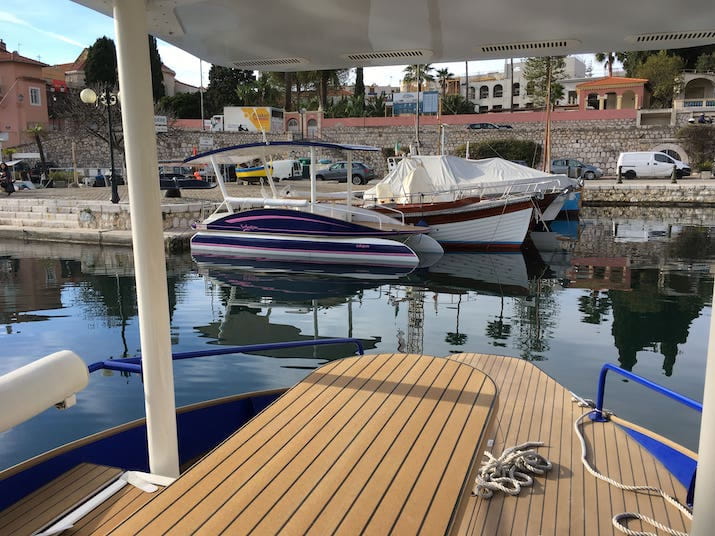 For nearly 3 years, this 100% autonomous solar-powered catamaran rubbed shoulders with the yachts of Monaco. Used privately by its owner, it has contributed to the influence of solar navigation in a very international environment. As a sign of recognition, the Yacht Club de Monaco even chose it to welcome journalists on the occasion of the Solar Boat Challenge. At the same time, the association of seaZen and the company Suncy Concept, which is growing stronger, has enabled a joint solar boat project to be selected in the start-up incubator Monaco Tech. The outcome of this collaboration is on the verge of becoming a reality with a new solar catamaran that we will soon be able to offer for sell. The Octopus is the last of the SunSeaRiders.

On June 23rd, 2020, the Octopus left Monaco for good to reach her new home port in Antibes Juan les Pins. In the young history of solar-powered yachts, this is the absolute record that has been broken for a boat of this size. The previous record dates back to 24 May 2018. A return trip from Beaulieu to Marina Baie des Anges enabled the seaZen franchise to receive an innovation award for its boat club. This time, 22 nautical miles are covered. At the arrival, the Octopus displays nearly 80% of battery charge after a cruise of pure happiness for its crew. That day, our 2 sister-ships, the seaZen and the Octopus crossed paths again off Saint-Jean-Cap-Ferrat.

Opening soon the seaZen base in Antibes Juan les Pins

The Octopus will start a new life. Like the seven other boats in the series, it will be used for boat hire. Reservations will soon be accessible with or without a guide, with license or license free from the seaZen website.

We no longer wish Fair Win but Fair Sun to this new 100% solar powered electric boat. It demonstrates once again that the energy transition is underway. In the meantime, you can very easily discover the rental of an autonomous electric boat powered by solar energy. Just meet us in Beaulieu-sur-Mer.