The most beautiful French Riviera's villas

The splendour of the Côte d'Azur owes much to its sumptuous villas. These treasures of the French Riviera, often hidden by imposing walls, remain open to the sea all year round. The  Côte d'Azur lifestyle is also about knowing where and how to admire these remarkable buildings surrounded by lush gardens. SeaZen presents its top 3 with their stories and celebrities. These villas also contribute to the charm of solar boat trips.

View of the Chateau Croe Antibes owned by Roman Abramovich

Where are the most beautiful villas in Antibes?

The town of Antibes, especially its cape, is a pleasant place to visit. The cap of Antibes is home to several majestic villas hidden in a forest of umbrella pines and some of them can be seen from the sea. The splendour of the villas can be seen simply by walking along the Cap d'Antibes. The length of the fencing walls bristling with surveillance cameras mean a lot about the villas. The promenade is still sublime with the Baie des Anges and the Alps in the background.

What's the history of this castle?

Have you ever seen the movie "Gatsby the Magnificent"? This work perfectly reflects the spirit of the wealthy bourgeoisie during the Roaring Twenties. The story takes place in a very upscale residential area where important personalities meet to party in a beautiful home. Surprisingly, the history of La Croë Castle is very similar. In 1938, the Roaring Twenties did not seem to be over for the Duke of Windsor and his wife Wallis Simpson. Extraordinary receptions are held in this castle. For many years, the Duke's Villa is known as the most select place in the region. For many years, the duke's villa is known to be the most select place in the region. Became King of the United Kingdom and Emperor of India, Edward VIII must abdicate in front of the outcry aroused by his proposed marriage with Wallis. This love story inspired many filmmakers, including W.E. Wallis & Edouard, co-written and directed by Madonna.

Built in 1927 in a Victorian style, for the English aristocrat Sir William Pomeroy Burton, this building looks exactly like the White House.

Left to be abandoned for thirty years, nothing remained of the castle but a burnt ruin and a wasteland. Under the impulse of a famous Russian oligarch Roman Abramovich, in love with the French Riviera, the castle was completely renovated from 2008 to 2010. The cost of the work would have exceeded 100 million Euros.

A swimming pool could be installed on the roof. This is a technical feat. As the building is listed, the architecture of the building had to be preserved. More recently, a new ecological swimming pool was installed as an extension to a waterfall. This ecological pool is easily recognisable by the colour of the water, as it is not the usual artificial blue of the pools on the Côte d'Azur. This detail is important to us because we are sensitive to ecotourism.

Observing the villas from the sea, one can sometimes 'stumble upon' the yachts of billionaires?

The parks of these villas are open to the sea, but they are protected from view by walls that are impassable from the land. SeaZen is at the forefront of approaching the villas. As the catamaran glides silently along the coastline, it is not uncommon to come across the owners' yachts. This is the case with the Eclipse and other equally famous luxury yachts. 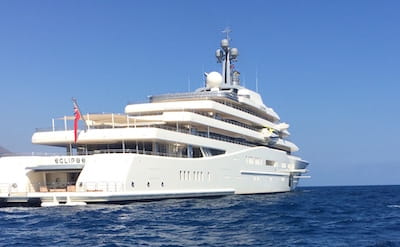 The eclipse of the same owner as Chateau la Croë, is one of the largest yachts in the world 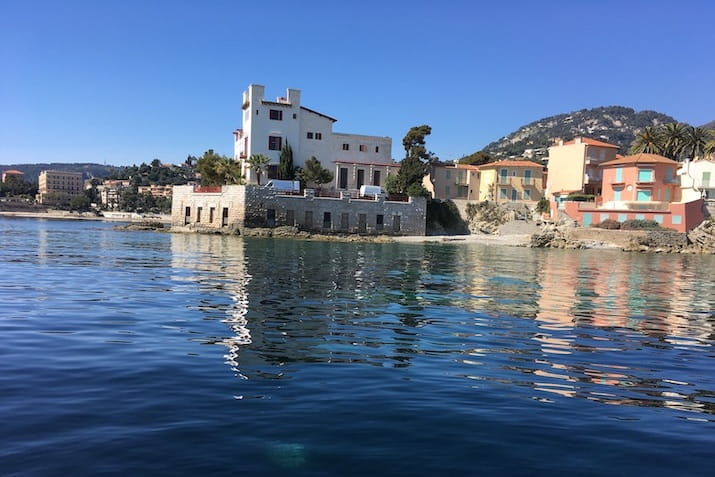 Exhibition by the artist Antoine Pierini

With a remarkable symbiosis between the Villa Kerylos and the artist Antoine Pierini, this temporary exhibition is open between May and September 2022. An opportunity to admire the use of glass in relation to the Mediterranean and to go back in time to Antiquity.

SeaZen loves to cruise along the French Riviera in a solar boat and we love to share our passions. The guided tour that we propose now takes you a little further to another famous house on the French Riviera, Villa Ephrussi of Rothschild.

Glimpse of the Rothschild's Ephrussi Villa at Saint-Jean-Cap-Ferrat

The Côte d'Azur has many treasures. Pleasant climate by the sea and unique panorama in the world are very appreciated qualities. An idyllic living environment in which many influential and rich people want to settle. This was the wish of Baroness Béatrice Ephrussi de Rothschild. Let's imagine the context of the times. In 1860, the County of Nice was a steep region, poorly served by transport. The arrival of the railway changed everything. Great fortunes and crowned heads from all over the world can easily spend their winters there. At that time there were no private planes but private trains. The Rothschild family owned the Chemin de Fer du Nord. The neighbouring King of the Belgians used to park his private train on a specially prepared track in Beaulieu-sur-Mer.

How to discover these villas peacefully from the sea?

If your budget does not allow you to rent one of these villas, you can probably book a solar boat. Whether renting a boat without a licence or on a tour, this peaceful and elegant experience is in perfect harmony with the charm of the Côte d'Azur. And there are many more villas to discover, including the iconic David Niven villa or the James Bond villas.

As ambassador of the Côte d'Azur France brand, seaZen is committed to a responsible approach