Discover the events you can attend with seaZen

Because seaZen is also about adventures and events, discover all the great sporting events you can attend on board our solar boats. Between the Tour de France sailing race and rowing trips, the choice is vast!

Théodore, from the Nice Nautical Club, left us this testimony during the Tour de France à la voile in 2016:

"Thank you seaZen for allowing us to have a front row seat to this stage of the Tour de France à la Voile. It was anchored a bit offshore, thanks to the panoramic cockpit of the SeaZen, we really had the impression of being in the race! "

Watching the arrival of the Tour de France sailing race from a solar boat is quite an experience! We repeat this sea trip every year during the competition.

Fourth time stage city, Nice had just closed three intense weeks in emotion this July 29, 2017, and crowned the winner of the Tour de France sailing race on the Promenade des Anglais! As the capital of the Côte d'Azur and the cradle of solar sailing, but also the capital of yachting, it is no coincidence that its yacht club, one of the most beautiful clubs in France, is passionate about this exceptional event that we can attend every year from the sea, aboard our electric boats seaZen.

Three crews of three times six members of the Nice Nautical Club were able to watch the finish of the race from a solar boat. Thanks to its panoramic deck, the Suncy 19 was able to comfortably observe, in silence and in the shade, the sailboats evolving in front of the port of Nice.

Here are the best images taken during the memorable day of July 29, 2017, under a magnificent Force 4 sea. 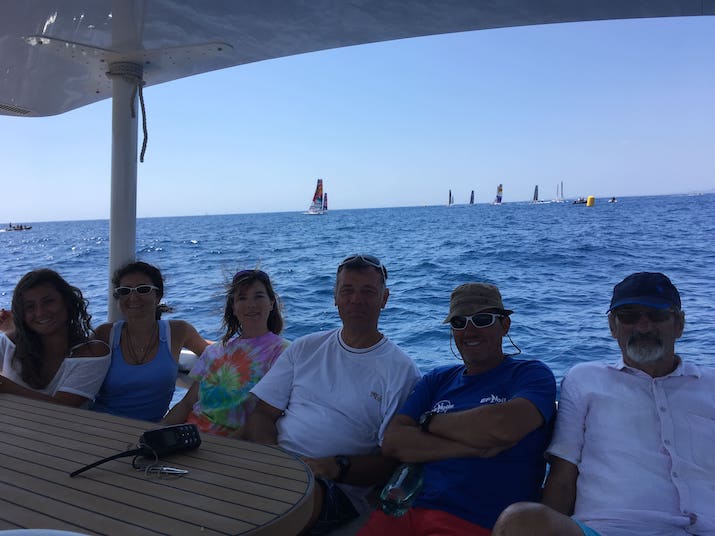 The suspense will have been maintained until the end, here is the official podium:

In 2016, seaZen left from the port of Beaulieu sur Mer and met up with the Rando'Aviron organizing team in the port of Nice, after a magnificent winter crossing of the Villefranche harbor.

Each year, more and more people are enjoying off-season sailing on the Côte d'Azur. This year 150 rowers belonging to 26 French and foreign clubs (Belgium, Italy, Luxembourg) gathered in Nice for the BDA 2016.

A team of supporters listened to the lapping of their favorite teams' paddles while enjoying the aroma of a good hot coffee. In fact they were on board of seaZen, the silent and odorless electro-solar rental boat.

Find the article of the Club Nautique de Nice on this link :

On June 23 and 24, 2018 took place the Nice Abyss Contest. An international freediving competition organized by the International Center of Apnea Diving (CIPA), based in Nice.

Accustomed to flying over the Posidonia meadows during our solar boat rides, we wanted to know more about this event that took place just a few fathoms away from our favorite anchorages in the Villefranche harbor.

Participating in the Nice Abysse Contest on June 23-24...

Freediving is very old since it was originally used for fishing. Thanks to the film Le Grand Bleu by Luc Besson, starring Jacques Mayol and Enzo Maïorca, the public discovered a spectacular discipline. These two pioneers have reached unequalled depths by practicing yoga. In a way, they applied to freediving what we apply to sailing, a zen approach that respects the environment.

Since then, the discipline has continued to evolve. The CIPA organizes a competition aiming to initiate the public with maximum safety conditions. The number of participants is limited to 50, the competition is very supervised, and an underwater drone follows the freedivers continuously. It is therefore a great opportunity to learn easily in the friendly atmosphere of this event that takes place in very few places in the world.

...and take a solar boat ride

Without going to the same depths, the seaZen glides over the translucent bottoms of the Natura 2000 Reserve. A great opportunity to discover the wonders of our seabed. The solar catamaran offers unequalled comfort and conviviality for this type of vessel. 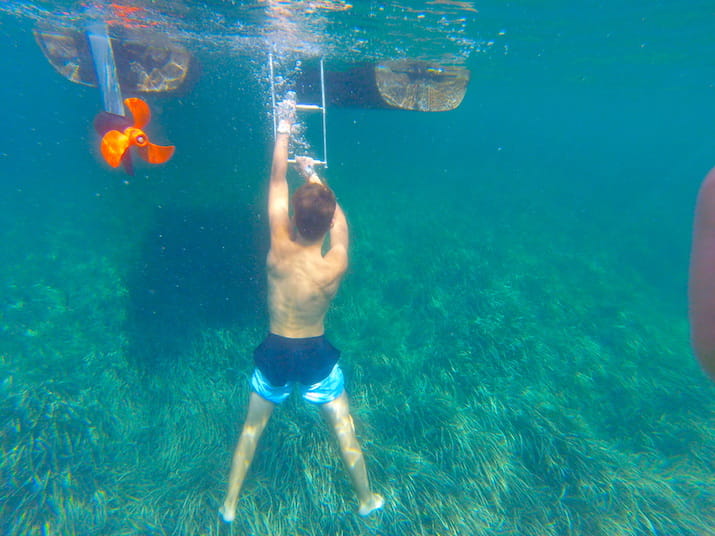 Discovery of the posidonia meadows

SeaZen offers guided sea trips. Then, it is quite possible to rent the boat without a license to discover the coastline from Nice to Monaco depending on your level of experience in solar navigation. Think about it for your next swimming desires!

A paddle race in Villefranche

The French and European stand-up paddle elite lined up at the start of the Villefranche Paddle Race on March 24 and 25, 2018 in Nice. First stage of the federal circuit Coupe de France, the event offered for two days different courses adapted to all levels of practice, in the heart of the sumptuous bay of Villefranche.

This project is that of the association Triathlon des Mers and four students, including the French athlete Martin Letourneur:

"Villefranche is one of the first places we discovered when we arrived in Nice, the bay lends itself perfectly to paddling and we instantly fell under the spell of the landscape. The idea of the Villefranche Paddle Race is above all to make discover this magical place to the greatest number of people, so what better than a SUP Race competition for that? "

Several French stars of the discipline had already signed up: the reigning French champions Martin Vitry and Mélanie Lafenêtre, but also the recent winner of the Glagla Race Tom Auber and the best Mediterranean paddlers of the moment such as Nicolas Beynet, Jules Langlois and Didier Leneil.

Counting for the 2018 French Paddle Race Cup circuit, the "Elite" races launched the federal season and allowed competitors to qualify for the French Championships. In addition, with a prize money of 2000 € and recognized as a major regional event of the Paddle Race in Europe, the Villefranche Paddle Race took advantage of the status of Regional Event of the Paddle League World Tour 2018. In addition to the international media coverage of the competition, the best paddlers were awarded precious points in the international SUP WORLD RANKINGS ranking.

Throughout the weekend, recreational paddlers were also able to enjoy the bay of Villefranche during the Open races, open to all types of boards. From 9' to 18' paddleboards, including BIG SUPs, the goal of the Open races is to gather as many participants as possible. Finally, a Kid's Race allowed budding paddlers to have fun in complete safety on a fun and adapted course.

Have you thought about following paddles with a boat?

The solar boat and the paddle are made to sail together

You are staying between Nice and Monaco and have probably thought about renting paddles. But the whole family doesn't necessarily want to do it. So while the fans are enjoying it, the others who wish to be quiet can stay comfortably installed on a solar boat. SeaZen offers you a typical activity of the Coeur Riviera, the paddle accompanied by a rental boat without a license.

During this boat ride, a whole logistic base will follow your loved ones. On board the seaZen you can keep your drinks cool, stay in the shade of the sunroof or warm up on the sun deck. You are in the best conditions to photograph your loved ones, support them or help them correct their faults. Live aboard the solar boat and get some exercise by alternating paddling sessions and rest on the boat. It is said that paddling is athletic and very good for developing the abdominal muscles!

Moreover, the paddle moves at the same speed as the solar boat, so it seems that the two activities were designed to sail together.

That said, there is nothing to stop you from racing between the paddle and the electric boat, in any case it is 100% ecological!