A first edition for the Marina High Tech 2018

MHT18, is the International Exhibition of nautical innovation, sustainable development and protection of the marine environment. For its first edition under the impulse of the town hall of Villeneuve Loubet, it has welcomed more than 40 exhibitors in the futuristic site of the Marine Bay of Angels.

For 2 days the exhibitors presented their solutions to a local audience interested in the innovations. SeaZen came especially for the occasion in demonstration.

We especially liked Pedal board Paddle, which combines the charm of the paddle while being remarkably stable and fast.

12 exhibitors were selected during this show for a special innovation prize.

There was the autonomous light buoy presented by Aqua Module. This innovation won the first prize. Its buoys are completely autonomous thanks to an anti shock design, letting the light pass to feed solar sensors integrated in the buoy.

SeaZen received the second prize for its Boat Club offer. A solar catamaran rental service, built in the South Region by Suncy Solar Boat. This Boat Club allows its members to soak up guided tour or boat rentals license free between Nice and Monaco.

Award ceremony in the presence of personalities

The awards ceremony took place in the presence of: 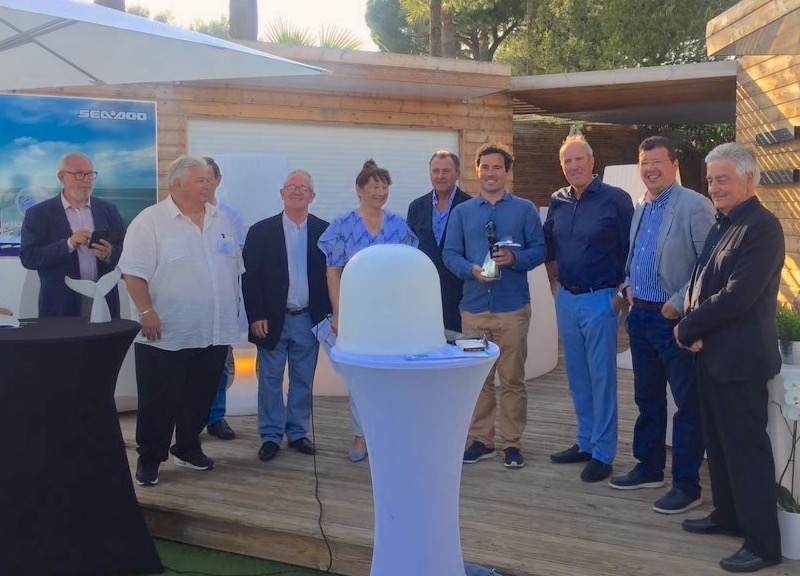 Coincidence? The trophy in the shape of a blue whale tail is reminiscent of the whale statue in front of the seaZen at the port of Beaulieu.

The demonstration of solar boating autonomy

In addition to the quality exchanges between exhibitors and the public, this show has introduced solar navigation. SeaZen has rotated the port of Marina Baie des Anges. This will have been an opportunity to show the quality of the boat and the subtlety of navigation in perfect solar autonomy. Many were thrilled to see that after a departure from Beaulieu at 7am, when the sun was low on the horizon, then after a series of uninterrupted rotation in Marine Bay of Angels until sunset, the Battery charge was still over 99%!

Last but not least, the boat is license free. It is therefore possible for everyone to rent it in the beautiful sailing site of Beaulieu sur Mer, just next to Nice.