A unique trimaran maxi with its enclosed cockpit

Unique in its kind, François Gabart's (Macif) boat, with which he travels the seas of the globe at extraordinary speeds, is a trimaran maxi crafted for solo sailing with a fully enclosed cockpit, a first in the offshore race. 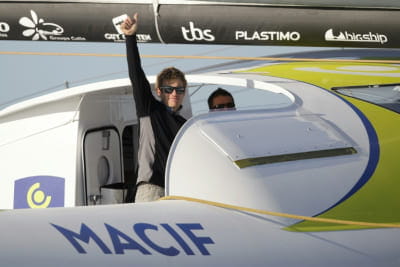 The French skipper François Gabard aboard his maxi trimaran "Macif" at the port of Le Havre, October 25, 2015

When you see him at the helm of his multi-hull on the videos he posts, Gabart looks like an adventurer in the space at the controls of a spaceship.

It was after his victorious epic at the Vendée Globe 2012/2013, that he was mitron this super machine capable of allowing him to return alone around the world at full speed but this time in multihull.

His new boat was launched on 18 August 2015 after having been designed by VPLP, in agreement with the wishes of the sailor.

The boat is a maxi-trimaran, classified in the very elitist category of Ultim (32 m long and 23 m wide maximum), but much lighter (about 13 tons) than those of rivals (15 tons on average). And equipped with foils, these famous appendages that revolutionize ocean racing by allowing the boat to fly on the water (the foils raise the boat over the water).

"The lighter the boats are, the earlier the foils are effective, we made a smaller boat than those of the Ultim class, we reduced the size of the mast, the sails, so we gain weight. 'go in this direction and we managed our success,' says AFP naval architect Vincent Lauriot-Prévost.

The idea was to make the best compromise between power and lightness for this boat to be very successful solo. "It's really a solitary boat", insists Vincent Lauriot-Prévost.

The foils are much smaller than those of the very last maxi-trimaran like that of Sébastien Josse (Maxi Edmond de Rothschild) and Armel Le Cléac'h (Maxi Banque Populaire).

"The foils are relatively small and at the same time very stable.They are less efficient than larger foils but we are on an evolving project," says the architect.

The boat will be under construction after the world tour for large foils to be laid.

What will not move, it will be this enclosed cockpit brilliantly imagined Gabart.

Perfectly seated in a bucket seat, used by rally drivers, he has at hand his dashboard, his computers, his kitchen utensils for a rudimentary drum and his bed-berth.

It is sheltered from the wind and squirts of water that all the sailors constantly take in the face and which experience.

"On a world tour, his life consists of going fast all the time and being in a state of stress for a month and a half, feeling protected allows him to push the machine further. "says Guillaume Combescure, one of the engineers of the team.

"François has the first boat designed to sail 100% dry," says Lauriot-Prévost. "He can go from his + appart + to his office in 'Crocs' He must go to his garden from time to time to see if everything is fine and there he must put his wax".

Another record: a solar boat has been sailing for more than one year with a self-service access and zero kW

Launched in June 2016, SeaZen has still not been connected to the grid to recharge its batteries. To date we are at Zero kilowatt consumed, which makes seaZen the most energy efficient boat rental service in the world. Thanks to its photovoltaic panels as well as training in solar boating, it is used either for boat trips or self-service boat rentals. 100% of the users loved the Zen navigation, elegant and respectful of the environment.

You wish to have your Boat Club between Nice and Monaco ? Coming to meet us at Beaulieu sur Mer.